Aliena J. Gerhard wrote on Facebook July 17 at 3:02pm
I'm saving it here because it's sweet.


I told our boys (ages 8 and 6) that July 24 is the official NO LEARNING day. At first they were excited and curious. We talked about it and then I told them, offhandedly: "You are not allowed to learn anything. Nothing..... that means no reading, either." Their response (in very loud and emphatic tones): " NO!!!!! We won't do it!!!!!" My heart is full. Cheers to unschooling!
at Sunday, August 02, 2015 No comments:

In a discussion group I'm not on, there was some criticism of Learn Nothing Day, or rather of the unschoolers who share happy stories of learning, on that day. In a public exchange about those objections, Karen Angstadt wrote something beautiful. I'll quote what she's responding to so hers shows better on that field. :-)

I think it serves its purpose, which is to create a field against which learning can be starkly seen, and it does it lightly and simply. It's something we can use as shorthand througout the rest of the year, when people say "Will there be days they don't learn anything?" and we can say "July 24."

This: "I think it serves its purpose, which is to create a field against which learning can be starkly seen" was so spot on for me. When I first heard about Learn Nothing Day, I was still very new to unschooling. I was uncertain that all learning was equally important, and I was still dividing life into "subjects"—lots of deschooling was still needed.

I told my kids and they told me quite certainly that it would be impossible to go a whole day without learning. But we tried it anyway. And I saw SO MUCH MORE learning happen because I was watching so closely. It was like a big curtain was lifted that had been preventing me from seeing clearly. When I think back today about that moment, it feels like THAT was the real beginning of unschooling for me. It still feels electric in my memory—all the connections I made that day about learning and its value to the learner within the place and time it is learned. I am so grateful for Learn Nothing Day.

Internet discussions are impermanent, but it might still be visible here:
(Karen's comment four or five years after her first Learn Nothing Day)
at Wednesday, July 29, 2015 1 comment:

"Thank you for being a very great source of inspiration of a better way of life in my family."

Ale Gutiérrez‎ wrote that on Facebook and sent this photo! 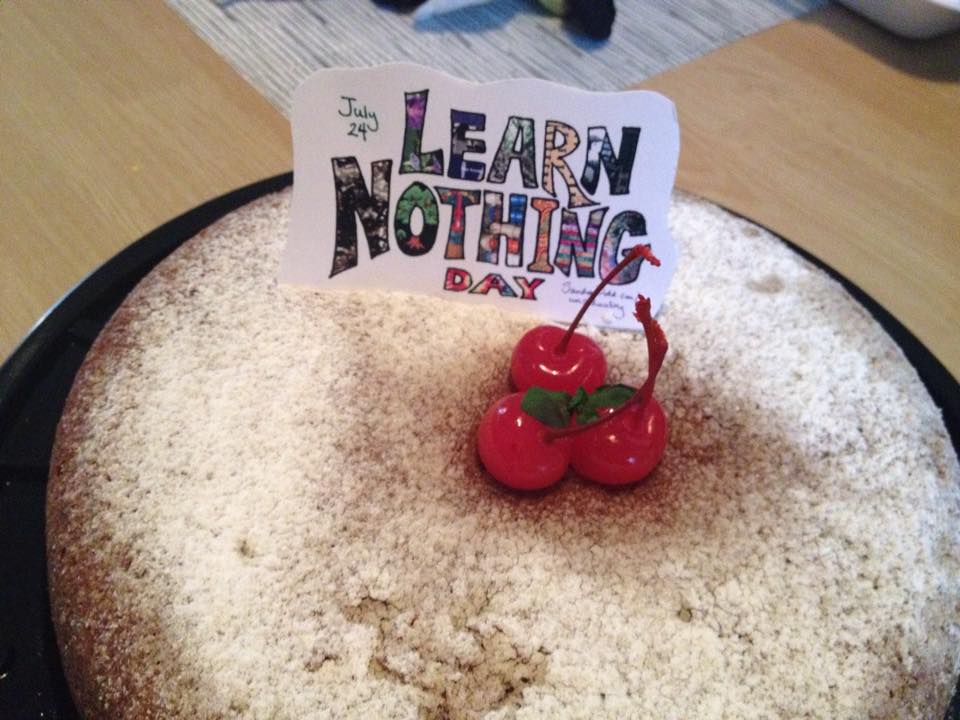 It is a "vino tinto" cake, I reminded my husband the celebration of this day and he brought a cake we ate in honor of unschooling, and the changes that have taken place at home in the last five years. Joy and happiness.

Sometimes I google up a little Learn Nothing Day storm, to see what people have said that I missed. Two years ago, someone posted a note on Reddit and netted some lame (but amusing) comments.

You can click it to get to the real live Reddit page, but I captured the 2013 batch, below:

The criticisms are like landmarks behind us in the distance. 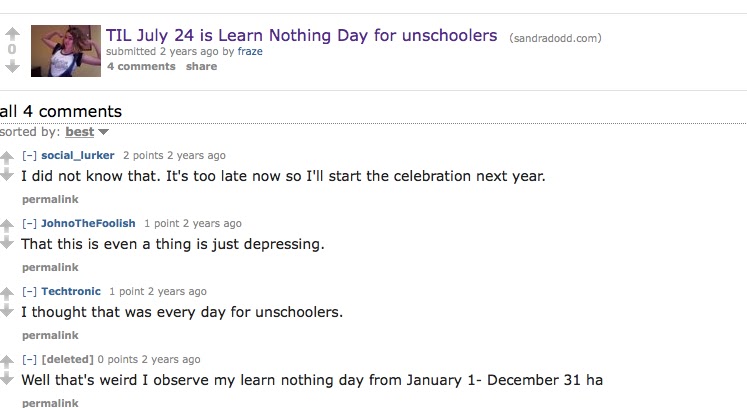 Email ThisBlogThis!Share to TwitterShare to FacebookShare to Pinterest
Labels: criticism

Podcast on Learn Nothing Day, with the voices of Amy Childs and her daughter Kayla, Julie Daniel, Alex Polikowsky, Hema Bharadwaj and Sandra Dodd, maybe not in that order.

Fifty more podcasts like that: Unschooling Support
UDATE: You might need to download each podcast to hear the whole thing, but at least some will play right there.

The Learn Nothing Day podcast is from June 2014; when I shared a link last year, there were only a couple or three in the set, but Amy's series is finished and you'll like other things there, too!
at Saturday, July 11, 2015 No comments:

Email ThisBlogThis!Share to TwitterShare to FacebookShare to Pinterest
Labels: listen

Two weeks until Learn Nothing Day!

Last year I made a big deal about Learn Nothing Day, because it was the seventh one. I grew up in a culture where seven is a fun, lucky number. it's the first cool number after one. Then 10, 12 and 13 have a bit of "cool," and after that 18 and 21 (for people's ages, but not for anniversaries).

So yesterday I was thinking it's kind of "culturalist" (?) of me to make a big deal last year and to slough off this year. I remembered that 4 and 8 are bigger and better in Japan than where I live, but I didn't remember why, and wasn't sure my memory was right anyway. Found this!!

I know that in Chinese the number 8 is a homophone with prosperity. However, in other Asian cultures 8 seems to have a special place even when it is not a homophone with some auspicious word.

My favorite example from Japan relates to the story of Mr. Toyoda founding his auto company in the 1930's. He consulted a soothsayer about what to name it. The soothsayer noted that "to write Toyoda (in Japanese syllables) you need 10 strokes, but to write Toyota you need 8 strokes which is much more auspicious." And thus the Toyota auto company was born.
found it here 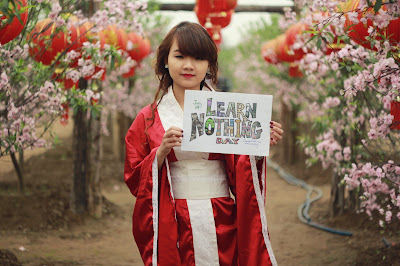 On a page about what's special about numbers (from a mathematician's point of view), this year's anniversary is
8 is the largest cube in the Fibonacci sequence.
(from What's Special About This Number?)

So although eight doesn't naturally strike me as auspicious, in honor of the more-than-eight Korean dramas I have watched this year, and the fact that this is the ONLY unschooling holiday that's eight years old, prepare for the 8th Learn Nothing Day, coming soon.