The original is on my personal blog as 3rd Learn Nothing Day winding down There are a couple of comments there, but I've brought the code from the other blogpost to reside here, and backdated it here to that same date, July 24, 2010. (It's actually being added here on June 23, 2014.)

This was very cute, on facebook. I came across a discussion of people all using the same "profile image" I had (more or less): 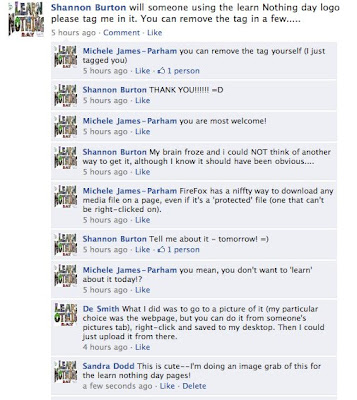 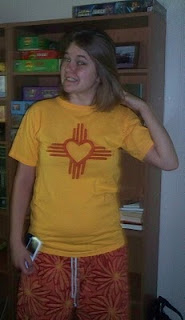 And now that I've been informed that a package I sent to Adam Daniel in the U.K. has arrived, I can show this image of Holly, in an ACE Festival shirt, yesterday:

My birthday gift was a lot of help to clean up the library and rearrange things so that when our new couch [well, not really "couch," but set of modular couchish-to-guest-bed(s) thing] arrives on Tuesday there will be a good space for it. Found some things I had lost, and gathered up some books to give away. Kirby called to wish me a happy birthday, and talked to me and Marty about things we can send back to Austin with him when he visits, and IT RAINED! Real, hard rain with thunder and lightning. Beautiful. We opened up doors and windows. After the rain, Marty and Ashlee went and got food from Golden Pride—smoked chicken and carne adovada burritos. Holly's friend Tony was here. He played piano downstairs and we got to hear. He's the keyboardist for Holly's favorite local band. Very nice birthday.
at Saturday, July 24, 2010 No comments: